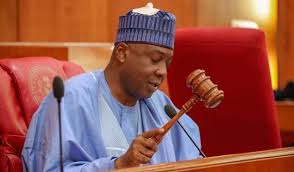 Former President of the Senate, Bukola Saraki, has opened up on why the ruling All Progressives Congress, APC, government failed in its attempt to remove him from office.

Saraki who spoke in Calabar on Tuesday during a consultative forum with the People’s Democratic Party delegates as well as other party members said he had the capacity to hold people together, Vanguard reports.

The ex-governor of Kwara State who came to canvas support from PDP delegates ahead of the presidential primaries scheduled for May 2022 assured Nigerians that he was prepared and capable to lead the country into a better future if given the opportunity to lead.

He said, “We are inching into a failing state, cost of living has skyrocketed, unemployment is high; we don’t have the luxury to let emotion define who leads us today. We don’t have the luxury of saying I will vote for him because we speak the same language or we practise the same religion, Nigeria needs a president who is a team player.

“I will leave Nigeria a better country than I met it, if given the opportunity to serve. As we speak, Nigeria spends 80 percent of its revenue to service debt; there is no way we can develop as a country with this kind of indices.

“I have held people together before in the Senate, the reason their ploy to remove me failed was because I related very well with my colleagues, people I worked with even in such a hostile environment, I stood my ground; they wanted to borrow, we need a president who can afford to hold everyone together as well as stand his ground on the right policies that will move us forward.”