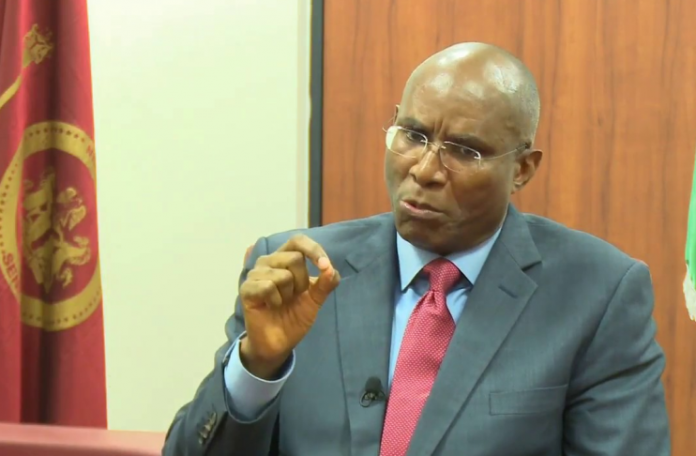 The deputy senate president and senator representing Delta Central in the National Assembly, Ovie Omo-Agege, has accused Governor Ifeanyi Okowa’s administration of corruption.
This followed the governor’s request to the state House of Assembly to borrow N150 billion barely one year before the end of his administration.

The Delta State House of Assembly on Tuesday approved the request made by Okowa to borrow N150 billion in favour of the state government.
Okowa had in his letter to the Speaker of the House, Sheriff Oborevwori, explained that the requested credit facility which has Zenith Bank PLC as the “lead arranger, would be principally to settle the arrears of unpaid certificates earned by contractors with respect to the completion of some critical ongoing legacy projects awarded by past and present administrations in the state, as well to take care of outstanding pension commitments to the state and local government areas, pensions in the contributory pension scheme, amounting to N20 billion and N10 billion respectively”.


But Omo-Agege on Wednesday reacted to the loan request in a statement titled “The N150 Billion So-called Loan Looks Too Corrupt To Be Ignored”, signed by Aruviere Martin Egharhevwa, Executive Assistant to the deputy senate president, and obtained by SaharaReporters.
“This huge loan, so-called, is not tied to any specific major strategic developmental project thoughtfully conceived and executed in the best interest of Deltans,” the statement reads.
Also according to the deputy senate president, “Given Delta’s distinct comparative financial advantage compared to many states of the Federation on account of its huge monthly oil derivation funds, Deltans deserve to know the compelling justification to hastily borrow a whopping N150 billion under the pretext of paying for contracts that the Okowa administration regularly claims it duly awarded, with funding guarantees. Strikingly, the so-called projects are all unknown to the public.
“Why is the Okowa regime borrowing hastily against anticipated ‘Petroleum Subsidy Payment’/‘refund’ with indeterminate crystalisation time? Are they not wetting the ground for the next administration to contend with huge debts unnecessarily?
“Knowing that the repayment funds may not even crystalise till maybe 2027/2028, why is the regime doing this? As suggested by some commentators, is the N150 billion a 2023 ‘election war chest’? If true, we can only advise a rethink because it will fail with serious consequences. As reported, after about 7 years of neglecting the all-important duty of diligently settling pension commitments to our senior citizens, the Okowa regime now suddenly wishes to pay them from this so-called loan.
“Because these citizens are entitled to their pensions, they deserve to and must be paid their pensions, anyhow. However, the regime’s choice to pay them from an unusual source and close to the 2023 general elections is not lost on discerning minds, including our seniors.
“Whatever the intentions are, they will be clinically shut down at the right time. We also believe such borrowing must be responsible, and not recklessly propelled by corruption and primitive private interests. It should not be all about sinking many generations into intractable debts in the hope of achieving impossible electoral postulations.
“Without question, the N150 billion loan approved by the House of Assembly is an escalation of a very corrupt pattern of reckless borrowing by the Okowa administration to fund mystery projects or what Deltans now generally refer to as ‘audio’ or invisible projects.
“We strongly advise and warn them to think twice about this so-called loan. It looks too corrupt in appearance and character to be ignored. It will create too many problems for them. A word is enough for the wise.”
However, the state finance commissioner, Fidelis Tilije and his Information counterpart, Charles Aniagwu, on Wednesday said the fund would be used to pay for the completion of some critical ongoing projects awarded by past and present administrations as well as outstanding pension commitments to state and local government pensioners in the state.
Tilije said, “The funds totalling N270.6 billion ought to have been received a long time ago but because the federal government could not pay the whole money in bulk, it became reasonable and logical that the oil-producing states enter into an agreement for some part of it to be paid within 3 years and the other part within 5 years.
“Having reduced the debt profile of the state from N151 billion to N72 billion, it is important that we have so many other contracts that we have awarded within the period of time.
“Because it is a closeout of a particular tenure it became very important that we ensure those legacy projects including the new State Secretariat building are completely paid for before we leave office.
“The intention of governor Ifeanyi Okowa was to ensure that on transition day, the debt profile of the state would be almost insignificant. So, we thought it wise that rather than allow inflationary variables to dry down the proceeds of this recovery, it was important for us to discount some of them.”
Aniagwu said contrary to speculations on social media, the bridging finance is not for any political reason but simply to address special needs in the state.
He said the funds would be paid to the state in tranches on a quarterly basis.