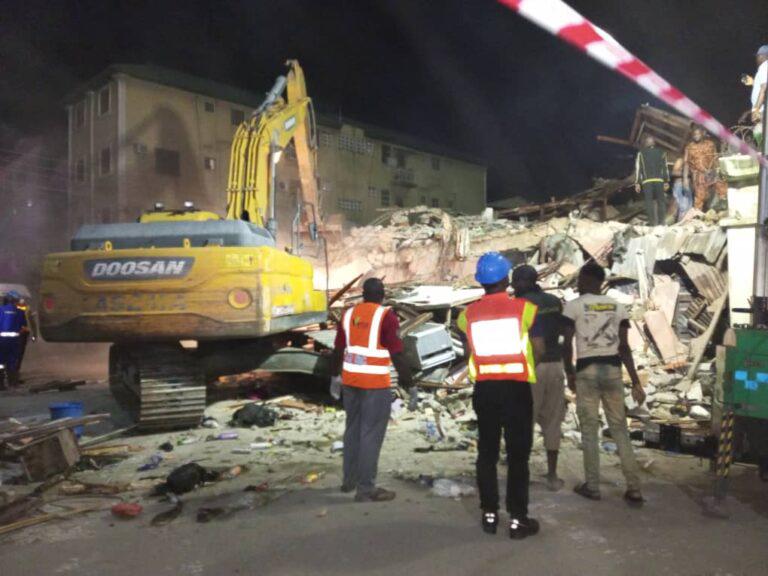 The National Emergency Management Agency has confirmed the death of five persons following the collapse of a three-storey building in the Ebute Metta area of Lagos Sunday night.

SaharaReporters had reported that the incident occurred around Sunday night and that many occupants of the building were said to be trapped under the rubble.

The Lagos State Fire and Rescue Service Sunday night said rescue efforts had begun. By Monday morning, at least 23 persons including children were said to have been rescued alive.

The acting coordinator of the National Emergency Management Agency, Ibrahim Farinloye, confirmed the death of five persons to The PUNCH, saying, “Another three-storey building, on Lagos Street, about 200 metres away from the current scene has shown signs of distress with part throwing pebbles and falling off.

“The building had also been marked as distressed but the occupants were deviant. However, the building has been re-sealed and occupants evacuated by officers of Lagos State Buildings Control Agency.

“Four deaths including two male and two female. 23 people have been rescued alive including seven children and 16 adults. Another young man, Tahin, has just been recovered, making five deaths.”

Dr Olufemi Oke-Osanyintolu, the Permanent Secretary of the Lagos State Emergency Management Agency (LASEMA), in a statement late Sunday, said some of the injured victims had been rushed to the Lagos State University Teaching Hospital for treatment.
“On arrival at the incident scene, an old three-storey building comprising rooms and parlour was discovered to have collapsed.

“Further information gathered revealed that the incident occurred around 10.56 pm with an undetermined number of people trapped.

“A search-and-rescue operation is ongoing. Twenty rescued alive and out of the victims rescued, two sustained severe injuries and have been taken to LASUTH for further treatment,” he said.