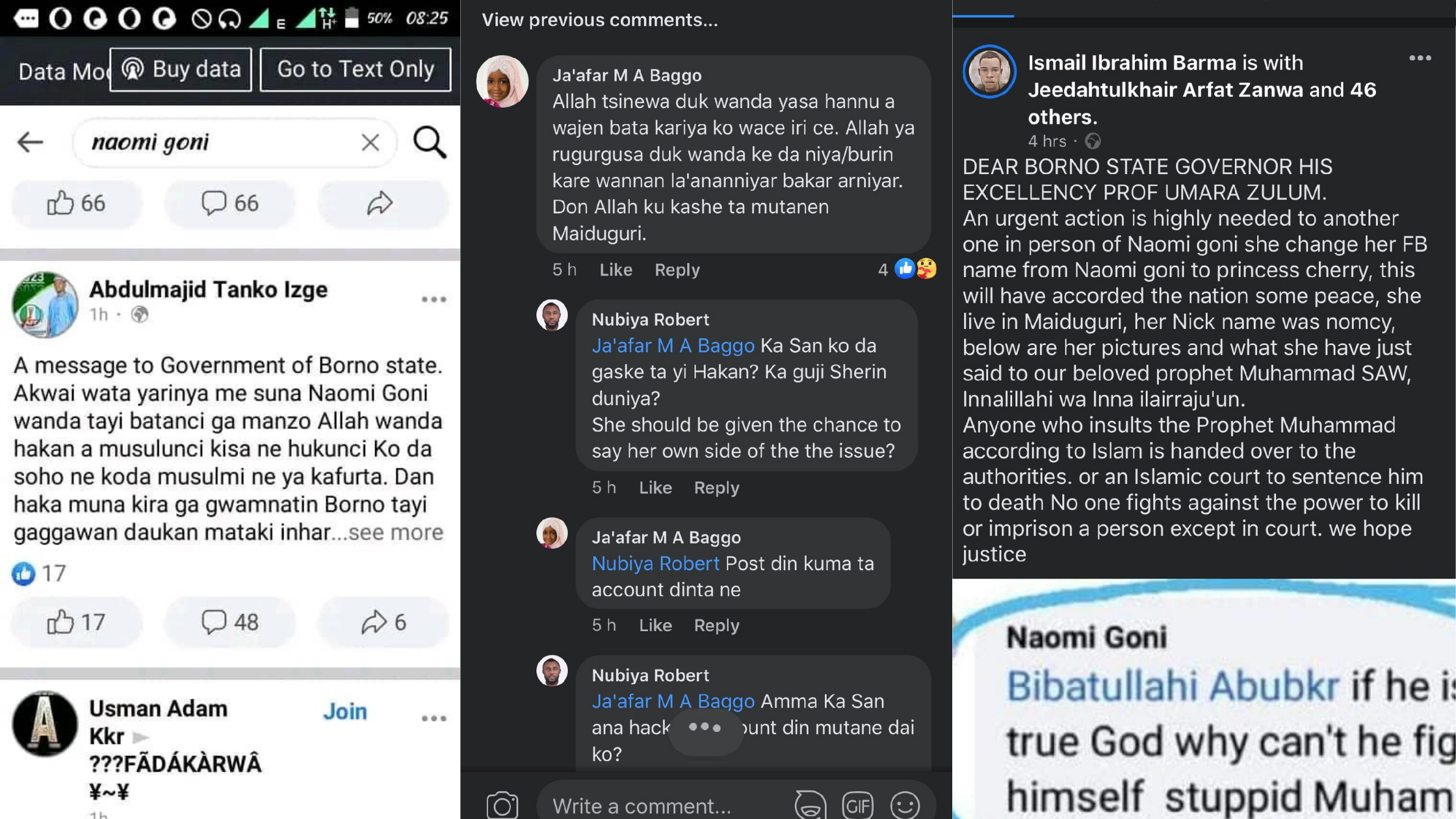 Some religious extremists in Borno State have threatened to kill a young woman, identified as Naomi Goni, after claiming that she allegedly insulted Prophet Muhammad (SAW) on Facebook.
SaharaReporters learnt that championing the threat is one Abdulmajid Tanko Izge who claimed to be the President of a group, Borno Youth Support.

He vowed that the death penalty was the punishment that would be meted out to Naomi.
The threat by the Borno extremists comes while the country has yet to resolve the gruesome murder of a 200-level Shehu Shagari College of Education student in Sokoto State, Deborah Samuel, last Thursday by a Muslim mob which comprised of her classmates.

The incident has continued to attract nationwide condemnation and the police have arrested two suspects – although a protest by some Muslim youths over the arrest on Saturday turned violent in the state and forced Governor Aminu Tambuwal to impose a 24-hour curfew.
In the Borno episode, SaharaReporters learnt that the police had taken Naomi Goni into custody over the death threats by the Jihadists.
Writing partly in Hausa, Tanko Izge said, “A message to Government of Borno State. Akwai wata yarinya me suna Naomi Goni wanda tayi batanci ga manzo Allah wanda hakan a musulunci kisa ne hukunci Ko da soho ne koda musulmi ne ya kafurta. Dan haka muna kira ga gwamnatin Borno tayi gaggawan daukan mataki inhar ba haka ba kuma mu musulmai baza muyi bacci ba kuma zamu dauka da kanmu (There is a girl named Naomi Goni who insulted the Messenger of Allah (saw) and in Islam it is a death sentence even if it is a Muslim. We therefore call on the Borno State Government to take immediate action or else we Muslims will not sleep and we will take action).”
He made the post on his Facebook as seen by SaharaReporters.
He added, “Naomi you must face the consequences. We will continue raising our voice until action is taken. #Findnaomigoni.”
“A Gaskiya Tura yakai Bango A gari Irin Borno wata Ta Zage ma aiki Amma gwamnati Bawani feed Back. Zuciyana yana Tapasa I will surely come for protest.! (In fact, the government has not yet commented on the situation. My heart is pounding I will surely come for protest).”
A check on Facebook also showed some northerners calling for her death.
“The punishment for blasphemy is death! in most religions including Christianity. Respect people’s religion. It’s simple,” one Farouq Umar Farouq wrote.
Another Facebook user identified as Ja’afar M A Baggo said, “Allah tsinewa duk wanda yasa hannu a wajen bata kariya ko wace iri ce. Allah ya rugurgusa duk wanda ke da niya/burin kare wannan la’ananniyar bakar arniyar. Don Allah ku kashe ta mutanen Maiduguri. (God condemns anyone who engages in anything of this kind. May God destroy anyone who intends to protect this damn evil lady. Please the people of Maiduguri should kill her.)
Speaking to SaharaReporters, a security source said Naomi had been taken into custody by the police.
“She’s currently under detention and denied making the post; she said her account was hacked after she gave birth last year. I don’t think she will be released soon so she won’t be killed. I heard some people are also planning to attack her father’s house here in Maiduguri.”