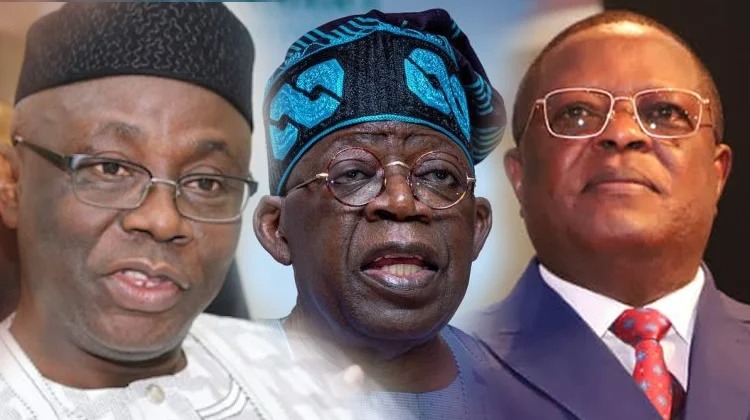 The All Progressives Congress Presidential Screening Committee has asked the party’s presidential aspirants if they would be ready to step down for the consensus candidate of the party.
The Committee, headed by a former National Chairman of the party, Chief John Odigie-Oyegun, queried the aspirants on 10 key issues including their dual citizenship status.

While there have been reports that the party may adopt consensus, the National Chairman, Senator Abdullahi Abdullahi, who emerged through the method in March, during an interview with Voice of America Hausa Service on May 26, said it would not be feasible for electing the party’s presidential candidate.
According to Punch, the issue of consensus and foreign citizenship, however, came up when presidential aspirants including the party’s National leader, Bola Tinubu; Governor Dave Umahi of Ebonyi State, his Jigawa State counterpart, Badaru Abubakar; the immediate past Minister of State for Education, Emeka Nwajiuba; Ondo-North lawmaker, Senator Ajayi Boroffice; Pastor Tunde Bakare and Mrs Uju Kennedy-Ohanenye, were screened in Abuja on Monday.
The questions the aspirants were asked included, “Do you have dual citizenship? Are you the subject of investigation by the Economic and Financial Crimes Commission or the Independent Corrupt Practices and Other Related Offences Commission? Have you been arraigned by the Code of Conduct Bureau? And have you ever been convicted for a crime?”
Other questions asked include, “Have you ever been declared bankrupt? Will you be willing to step down for a consensus candidate? What is your manifesto? Will you abide by the party’s objectives and manifesto? What is your APC membership status?”
The aspirants were also asked to present original copies of their credentials including school certificates.
One of the aspirants said, “They asked us pretty much the same questions. They asked about our record with anti-graft agencies, citizenship status, finances and our manifestoes. Of course, there were a few follow up questions depending on the responses given.
“They asked if I had any EFCC (Economic and Financial Crimes Commission) or ICPC (Independent Corrupt Practices and other related offences Commission) case. They asked about my manifesto and also asked me if I would be willing to step down in the event of a consensus. I told them I am a party man and will abide by the wishes of the APC.”
Last week human rights activist, Kayode Ajulo, who is a campaigner for Vice-President Yemi Osinbajo, wrote President Muhammadu Buhari, and the National Chairman of the APC on the danger of picking a candidate with dual citizenship or past criminal record.
Ajulo said there was a plot by the opposition to ensure that the APC is disqualified on the basis of this just as was done in the Bayelsa governorship race in February 2020.