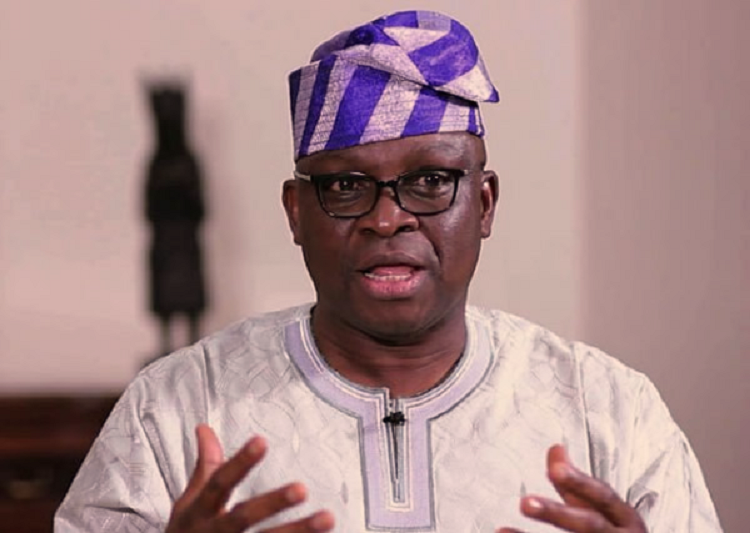 A former governor of Ekiti state, Ayodele Fayose says he will only support a southerner to emerge as President in 2023.

Fayose is a member of the Peoples Democratic Party (PDP) and Atiku Abubakar, a northerner is the presidential candidate of the party.

He was one of the presidential hopefuls of the opposition party.

The former governor in a series of posts via his official Twitter account said considering the fact that the incumbent Nigerian president, Muhammadu Buhari, is “a two-term northern presidency”, power must shift to the South in 2023.

He added that the constitution of the PDP recognises zoning and asked Nigerians to “await details soon”.

He said, “The PDP Constitution provides for a rotational Presidency. Section 3(c) provides that the Party shall pursue its aims & objectives by ‘adhering to the policy of the rotation & zoning of Party & Public elective offices in pursuance of the principle of equity, justice and fairness’.

“The current President of Nigeria is a 2-term Northern Presidency, thus implying that it MUST be a Southern Presidency in 2023 or NOTHING. Awa ‘South’ lo kan’. Nigerians should await details soon.”
Fayose in April withdrew his membership of the PDP Zoning Committee.
Fayose disclosed this in a letter dated April 5 and addressed to the Chairman of the committee, Governor Samuel Ortom of Benue State.
In the letter, Fayose cited his ambition to contest the party’s presidential ticket for the 2023 election as the reason for his withdrawal.
The PDP in May decided to throw open its 2023 presidential ticket to all sections of the country.

The party’s National Publicity Secretary, Debo Ologunagba, disclosed this at the end of the PDP’s National Executive Council meeting.

The decision to throw open the ticket, he said, was in line with the recommendation made by the party’s zoning committee.

NLC President, Ayuba Wabba. The President of the Nigerian Labour Congress (NLC), Ayuba Wabba, has warned the President Muhammadu Buhari-led government that the union after the two-day protest against the ongoing Academic Staff Union of Universities’ strike may declare a nationwide industrial action.Wabba, who spoke while featuring on Channels TV on Tuesday, said that the…

A Muslim rights advocacy group, the Muslim Rights Concern (MURIC), has opposed the endorsement of Governor Babajide Sanwo-Olu for a second term.The group noted that Christians have had their two terms and that it is the turn of Muslims to produce the Lagos governor in 2023. MURIC’s position was stated in a statement on Monday…

The National Chairman of the All Progressives Congress (APC), Adamu Abdullahi has withdrawn from a suit filed against the Independent National Electoral Commission over the exclusion of former Senate Minority leader, Godswill Akpabio as the party’s candidate in Akwa Ibom North West Senatorial District. SaharaReporters learnt that Akpabio had filed a case at a Federal High…

The Nigerian government through the High Commission to the United Kingdom has hired lawyers to defend a former Deputy Senate President, Senator Ike Ekweremadu and his wife, Beatrice, over allegations of organ harvesting.   Senate President, Ahmad Lawan disclosed this after a closed-door session of the chamber on Wednesday.       The Enugu West…

Step after step We ply life’s Road Through dust, through clay Through the airy amplitude of the seamless sky   The winds whirl or whisper           In accents so brisk and broad As the roadside grass sways to the rhythm    Of seasons which oblivion forgets   From the geography of Pain…

Mubarak Bala The Humanist community in Nigeria has said it was shocked by the sentencing of an atheist, Mubarak Bala for ‘blasphemy’. The community said it is “utterly disgraceful that a court in the 21st century could convict an individual for making innocuous posts on Facebook”. Mubarak Bala It urged the Muhammadu Buhari-led Nigerian government…