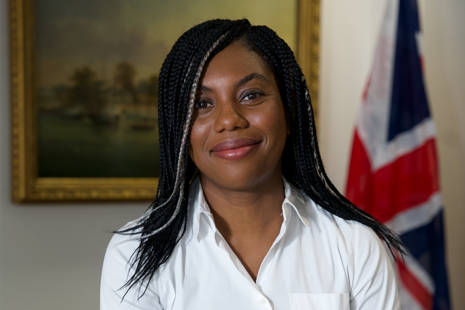 A former British Nigerian Minister in the UK, Kemi Badenoch, has lambasted Nigerian politicians, saying they use public funds as their private piggy banks and pollute the political system with failure to serve the people.

Badenoch, who is among the eight nominees in the race to succeed Boris Johnson as the British Prime Minister made the statement on Tuesday during her campaign speech.

The Nigerian-born woman who has served as Minister of State for Local Government, Faith and Communities and Minister of State for Equalities between 2021 and 2022 in the UK said she grew up in Nigeria and witnessed first-hand how Nigerian politicians misuse and mismanage public funds, promise heaven on earth only to pollute not only the air but the political system without rendering due service to the people.

Badenoch, who has also served as a member of Parliament for Saffron Walden since 2017 in the UK said she chose to hone her political career in the UK because the country’s system allows her to be free and become what she wants to be.

She said, “I’m running to be Prime Minister because when you are 42 years old, it is by definition, ambitious. But I am ambitious for our country and for our party.

“I chose to become a conservative MP to serve and I chose this country because here I could be free and I could become what I wanted to be.

“I grew up in Nigeria and I saw first-hand what happens when politicians are in for themselves. When they use public money as their private Piggy banks. When they promise the air but they pollute not only the air but the whole political system with a failure to serve others.

“I saw what socialism means for millions. It is poverty and broken dreams. I came to Britain determined to make my way in a country where hard work and honest endeavour can take you anywhere.”