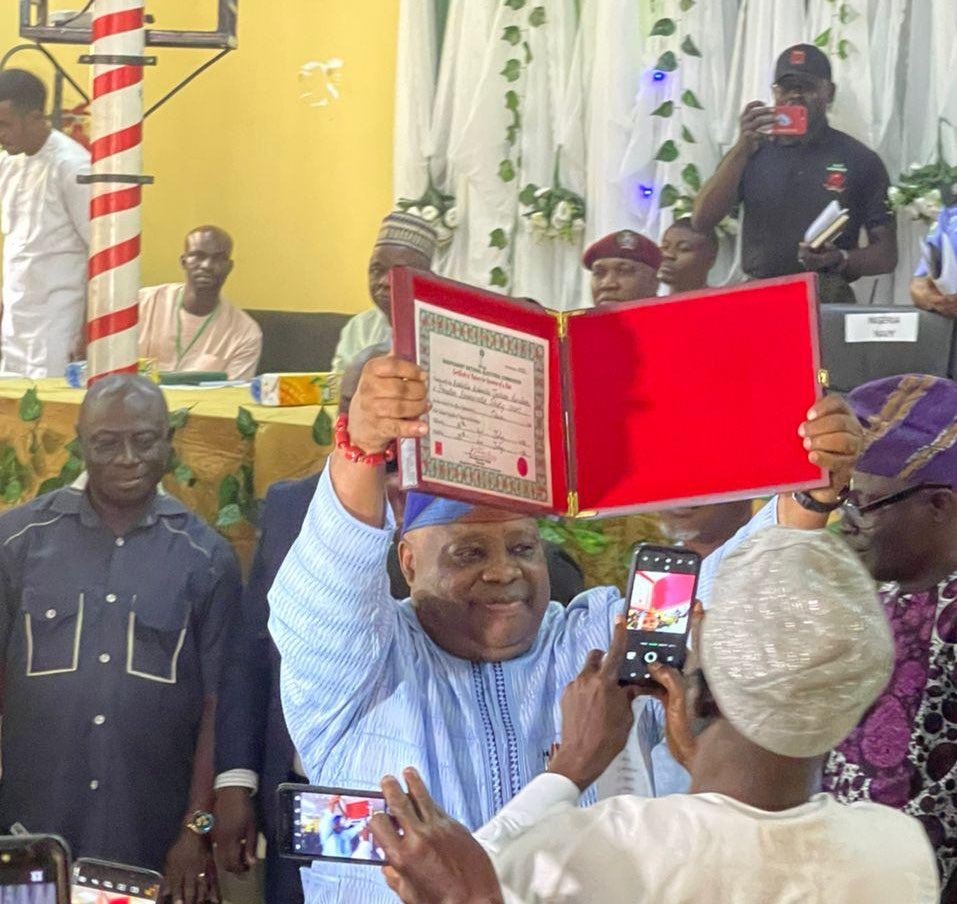 The Osun State Governor-elect, Senator Ademola Adeleke on Wednesday received his certificate of return from the Independent National Electoral Commission.

The certificate presentation to Adeleke by the INEC National Commissioner, Supervising Osun, Ogun and Oyo states, Prof. Kunle Ajayi, was preceded by the presentation to the deputy governor-elect, Prince Kola Adewusi.

Adeleke was declared the winner of the Saturday, July 16 poll, garnering 403,371 votes to defeat Governor Gboyega Oyetola of the All Progressives Congress, who polled 375,027 votes.

The presentation came about 24 hours after SaharaReporters reported that Nigerian singer, David Adeleke, popularly called Davido disclosed on social media that his uncle, Senator Adeleke had not received the certificate.

In his acceptance speech after receiving the certificate at a brief ceremony held at Osun INEC head office in Osogbo, Adeleke dedicated his victory at the poll to the memory of his late elder brother, Senator Isiaka Adeleke and the people of Osun State.

The Socio-Economic Rights and Accountability Project (SERAP) has urged Professor Mahmood Yakubu, the Chairman of the Independent National Electoral Commission (INEC) to extend the deadline for voter registration in Nigeria. This, the electoral commission, said would “give more time for eligible Nigerians to exercise their right to participation the same way the electoral body has extended…

A Federal lawmaker, Yusuf Gagdi, has said the National Assembly should enact laws to allow Nigerians bear arms to defend themselves against terrorist attacks.Gagdi, representing Pankshin, Kanke and Kanam Federal Constituency in Plateau State, said this would curb the spate of insecurity ravaging Nigerian communities, NAN reports. He said, “If we want to curtail the…

Ogoni Nine its referred on this facts – 10 November 1995 the Nigerian government executed nine leaders of the Movement for the Survival of the Ogoni People (MOSOP) on trumped up murder charges. Tellingly, Ken Saro-Wiwa and the others were at the forefront of a campaign against the environmental degradation of the land and waters of…

Sule Lamido Former Governor of Jigawa State, Sule Lamido, has said the opposition Peoples Democratic Party (PDP) did what is right by picking former Vice President, Atiku Abubakar as its presidential candidate for the 2023 general elections.Lamido hailed the efforts and contributions of the Rivers State governor, Nyesom Wike, to the PDP. Wike was one…