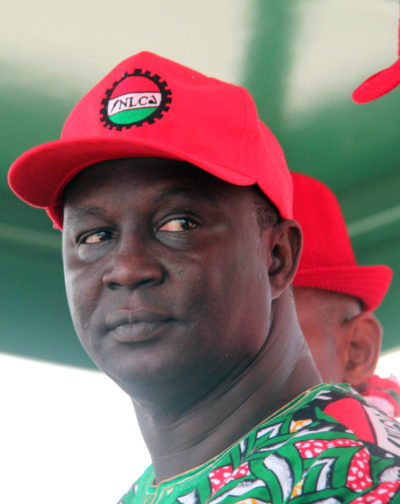 The President of the Nigerian Labour Congress (NLC), Ayuba Wabba, has warned the President Muhammadu Buhari-led government that the union after the two-day protest against the ongoing Academic Staff Union of Universities’ strike may declare a nationwide industrial action.
Wabba, who spoke while featuring on Channels TV on Tuesday, said that the union members were directly affected by the ASUU strike as most of their children were at home.

SaharaReporters reported that ASUU had embarked on the lingering strike on February 14, after the Federal Government failed to implement the 2009 ASUU/FG Agreement on modalities to fund the country’s public university education.
Some of the demands among others things are; the release of earned allowances for university lecturers, and deployment of the University Transparency and Accountability Solution platform for the payment of salaries and allowances of university lecturers.
It reported that NLC declared the two-day nationwide protest for Tuesday and Wednesday, July 26 and 27 respectfully in solidarity with the Academic Staff Union of Universities (ASUU).
The NLC president said the protest was not illegal, adding that it was a democratic norm which was constitutional and supported by international charters.

He said if the government did not resolve the issues after the two-day protest, the congress would resort to a three-day warning strike.

“The two-day warning strike is to call for attention and the issues to be resolved promptly. The next level is three-day national warning strike, if nothing has happened after the protest to show our grievances,” he said.

“These are democratic norms. Everywhere in the world, even as an individual you have the right to air your grievances. It is within the provision of our law; it is backed by UN charter for human and people rights; African charter for human and peoples right. It is there in our constitution — section 39, 40. Even the court has pronounced that you don’t require any permission. It is legal and within your fundamental human rights to protest issues.

“When people say it’s illegal, I think people should remember that no condition is permanent. We have had some of our current politicians join NLC to press for similar action in the past. We are not on a solidarity action, we are affected directly.”

The Convener of Lagos4Lagos Movement, Abdul-Azeez Olajide Adediran, popularly called ‘Jandor’, has won the Peoples Democratic Party (PDP) governorship primary election to emerge as the party’s candidate for the 2023 elections in Lagos State.Jandor defeated Dakova Kolawole after having 679 votes out of 709 available votes. Kolawole could only manage 20 votes while 10 votes…

Emmanuel Garba, the father of Deborah Samuel, a student of the Shehu Shagari College of Education, Sokoto State, who was killed by a mob over alleged blasphemy, has said her mother and one of her siblings are down with sickness over her sudden death. Garba, who hails from Tungan Magajiya in the Rijau Local Government…

The Osun State Governor-elect, Senator Ademola Adeleke on Wednesday received his certificate of return from the Independent National Electoral Commission. The certificate presentation to Adeleke by the INEC National Commissioner, Supervising Osun, Ogun and Oyo states, Prof. Kunle Ajayi, was preceded by the presentation to the deputy governor-elect, Prince Kola Adewusi. Adeleke was declared the…

President Joe Biden on Thursday named Karine Jean-Pierre to be the next White House press secretary, the first Black woman and openly LGBTQ person to serve in the role. Incumbent Jen Psaki is set to leave the post next week, US News reports.       Jean-Pierre takes on the role as the White House…

The Socio-Economic Rights and Accountability Project (SERAP) has threatened to sue President Muhammadu Buhari’s administration over the arrest of one of the editors of Peoples Gazette newspaper, John Adenekan. The Nigeria police raided Peoples Gazette newspaper’s office in Abuja on Friday and arrested one of its editors, John Adenekan. Shortly after Adenekan’s arrest, the operatives…

A pro-independence movement fighting for self-rule in South-West Cameroon, Ambazonian Boys have killed at least 20 people in a community in Nigeria.The Ambazonian soldiers were said to have crossed into the Nigerian community near Bashu in Boki Local Government Area of Cross River State to attack their compatriots who fled and refused to join them…