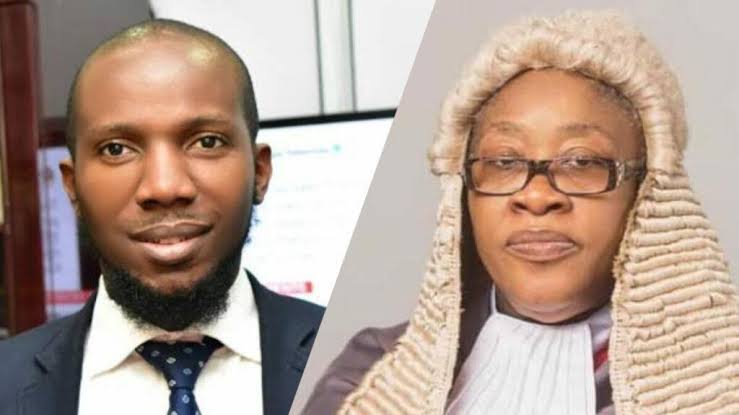 SaharaReporters reported earlier that Justice Obot allowed armed policemen wielding AK-47 rifles into the courtroom on Wednesday, June 30, after threatening to jail Effiong for accusing her of being bias and asking her to recuse herself from the case.

It reported that on Wednesday, July 27 in fulfilment of her threat, the judge jailed the lawyer for one month for asking her to recuse herself from a libel suit filed against a fellow lawyer, Leo Ekpenyong by the state governor, Deacon Udom Gabriel Emmanuel in Suit No. HU/279/2019.

Udom Emmanuel had sued Ekpenyong for defamation of character over a publication in which he accused the governor of “buying judgment” from the 2019 National Assembly Election Tribunal.

However, Justice Obot on December 15, 2020, gave judgment in favour of the governor, the Claimant/Applicant. The court found the Defendant liable for defamation and subsequently awarded N1.5 billion against him.

Effiong however challenged the judgement and one other involving a former senator, Effiong Bob and successfully persuaded the court to set them aside.

“You don’t stand before me and talk nonsense,” Justice Obot in December 2021 told the human rights lawyer.

“I’ve been on this side of the law for over 30 years and you don’t come and teach me the law from there.”

Refusing Effiong’s application, the judge had said, “Preliminary objections are taken first in every proceeding, especially when it touches on jurisdiction. If you have replied to that objection, why are you afraid?

“Is anything the matter with you? This is the court of law and things are done according to rules here. Sentiments do not overrule that.

“You are not on Channels Television, neither are you on Akwa Ibom Broadcasting Television.”

Following the manifest bias, the Defendant (Ekpenyong) through his Counsel, Inibehe Effiong, filed a Motion on Notice asking Justice Obot to reassign the case to a neutral judge, having shown bias.

Inibehe had argued that since the Chief Judge had already entered a default judgment in the suit against his client in the manner and circumstance, her mind was prejudiced or likely to be prejudiced against the Defendant/Applicant.

He had stated that “the animosity and hostility exhibited by Her Lordship, Hon. Justice Ekaette F. F. Obot, towards the Defendant/Applicant’s counsel predates the instant case and there is no indication that it will abate anytime soon.” Citing a case in “Suit No: HU/MISC.4/2019 between MR ENEFIOK EKEFRE VS. GOVERNOR OF AKWA IBOM STATE & ANOR, which was before the judge, she had cautioned and pointedly said to Inibehe Effiong, Esq: “stop fighting my governor.”

Justice Obot in the “course of the proceedings in that case, just like in the instant case, derided the Applicant’s counsel.”

The insistence of Inibehe to ask the Chief Judge to recuse herself was also based on the alleged hatred Justice Obot had exhibited against him several times in open court for defending his client.

The Chief Judge was alleged to have openly asked a lawyer, Mr Augustine Asuquo why he was practising in the same law firm with his colleague, Inibehe Effiong, and openly derided him in the most uncomplimentary terms and gone further to impress on Asuquo to leave the law firm (Inibehe Effiong Chambers) and look for “a senior lawyer” to work with so that he can learn.

She was also said to have accused Inibehe of evading service and “running away from the bailiff on the streets of Uyo”. She also accused him of bringing an “herbalist” to the court during a court sitting in the case.

It was gathered that Justice Obot saw the application to reassign the case as a threat to her career in the judiciary.